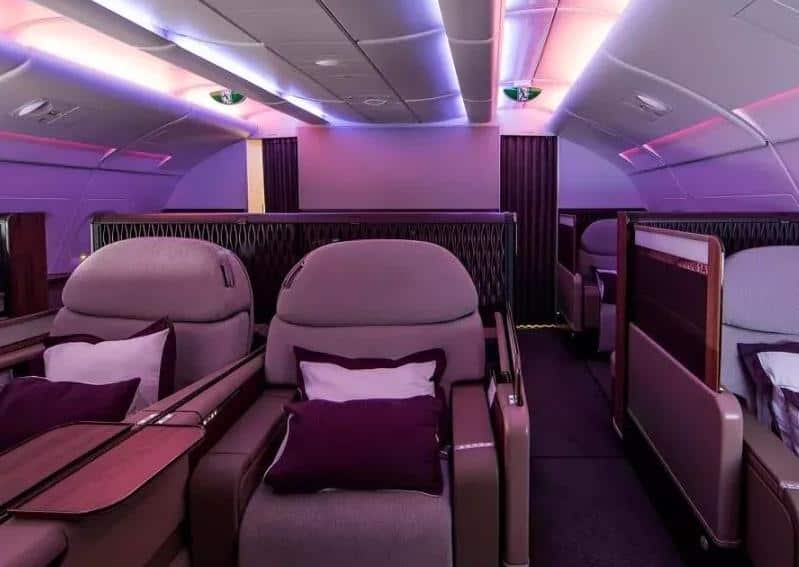 The curtain separating first and economy class symbolizes the differences in comfort, food, and service in the cabin. The cabin crew and passengers already know where each class is located, so why does first class have a separating curtain?

In this article, I’ll explain in-depth why first class has a separating curtain and if it’s worth flying first class.

Do We Need a Curtain Between First and Economy Class?

There is nothing more disheartening for an economy class passenger than to see the flight attendant close the curtain between first and economy class. So, why do airlines have a curtain separating classes?

Despite what many passengers believe, airlines don’t have a separating curtain to make economy passengers feel inferior and consider flying first class next time.

Let’s take a look at these reasons for the separating curtain in more detail below:

When flying economy class, there’s not a lot of privacy since the seats are closely packed. However, in first class, passengers can keep to themselves and enjoy a peaceful and quiet flying experience.

Instead of using private jets, some high-profile executives and celebrities fly first class in a commercial plane. The separating curtain helps maintain their privacy and allows them to enjoy a flight without fans or other passengers bothering them.

Creates a Barrier Between First and Economy Class Facilities

When paying a huge amount for an air ticket, you expect a luxurious flight, including delicious food and access to the lavatory without having to line up. The lack of a separating curtain would tempt some economy class passengers to stretch their legs in the first-class section and use the first-class lavatory, irritating first-class passengers who’ve paid a fortune for the flight.

FAA (Federal Aviation Authority) guidelines stipulate that airlines must have one flight attendant for fifty passengers. Airlines typically have this flight attendant to passenger ratio in economy class. However, this ratio is much higher in first class, as first-class passengers expect excellent service.

The FAA Requires Planes To Have a Separating Curtain

After the horrific events of 9/11, the FAA required separating curtains between classes to be removed so that air marshalls and flight attendants could monitor passenger movements more closely.

However, the FAA has since scrapped this regulation and now requires airlines to have separating curtains once again. The main reason behind this is to reduce the number of passengers around the cockpit, which could be a security risk.

This regulation also prevents passengers from congregating in a particular area, which is also a security risk.

Is It Worth Flying First Class?

A common gripe with economy class passengers is that, when boarding, they must move through the first-class cabin to get to their seats. This makes them feel disappointed and worried about their tiny economy class seats. So, is it worth the money flying first class?

It is worth flying first class if your flight is very long, you’re using air miles, or you have an injury or medical condition that requires you to stretch out. It might also be worth it if you’re traveling for a once-in-a-lifetime trip.

I’ll discuss whether or not first class is worth it below in more detail:

Your Flight Is Very Long

On short-haul flights of less than five hours, airlines often use smaller aircraft where there’s very little difference between first and economy class. In such cases, it’s not worth splurging on a first-class ticket for better pretzels or priority boarding.

However, if you’re traveling to the other side of the world, and your flight will be very long, it might be worth buying a first-class ticket. Many airlines have scheduled flights longer than seventeen hours, and flying first class can make your flight a much more enjoyable experience.

Being able to stretch your legs and move around the cabin more freely can help you arrive at your destination feeling fresh.

Flying first class is too expensive for many people, and most travelers would instead put the money toward another trip abroad or stay at a luxury hotel.

You Have an Injury or Medical Condition

Travelers who have had a recent injury or a medical condition that requires them to stretch out and move around often might find it medically necessary to book a first-class ticket.

Below are some examples of where a first-class ticket could benefit your health:

People who are very tall or obese may find that an economy class seat is too restrictive. While booking two economy class seats or selecting an aisle or emergency exit seat may be an option, they may find first class far more comfortable.

If you’ve always dreamed of traveling to a certain destination and finally saved up enough money, it might be worth splurging on a first-class ticket to make the trip extra special.

You Need To Work During the Flight

If you’re traveling for business and you need to work during your flight, you might have difficulty working when flying economy class. If the passenger in front of you has reclined their seat, your laptop might not fit correctly on your tray table, and you’ll have limited space to work.

Being in a first or business class seat allows you more room to work, a quieter space to focus, and fewer distractions. Additionally, you won’t have to worry about people looking over your shoulder while you try to get some work done.

If first class doesn’t sound right for you, in this article I talk about whether or not economy plus seats are worth the upcharge.

The FAA also requires all American aircraft to have a separating curtain between classes.